Julia Musgrave has given lectures, run study days, and devised courses for colleges, and private art societies. Lectures can be delivered by Zoom if required.
Please get in touch if you have a  lecture requirement not listed below. 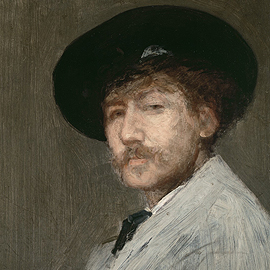 The Irritating and Influential Mr Whistler

An American artist in London, James Abbott McNeill Whistler was a leading proponent of the idea of “art for art’s sake”. He signed his paintings with stylized monogram of a butterfly with a long stinger for a tail – as much a symbol of his love of Japanese art as his assertive and sometimes combative nature.
Having lived and worked with the Paris avant-garde he settled in London in 1859 having created a distinctive Post-Impressionist style at a time when many of his British contemporaries had yet to come to terms with Impressionism. Whistler’s art moved painting towards abstraction, sparked a renaissance in printmaking and gave us the Peacock Room, a masterpiece of interior design.
Inspired, influential, and infuriating, his art was full of subtle delicacy, he had a wide social network of friends and family and yet, if crossed, could be a formidable opponent. He mastered the art of making enemies. 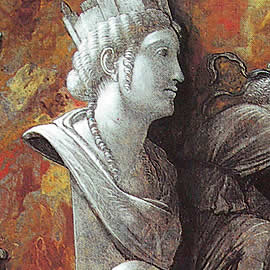 Mantegna and Bellini: brothers in art

Early Italian renaissance ideas of realism and pictorial space developed in Florence but spread rapidly across Italy as the city’s most sought-after artists were hired to work outside their home town. The marriage of Andrea Mantegna to Nicolosia, the daughter of the Venetian artist Jacopo Bellini, meant that the ideas of the Florentine sculptor Donatello, whose work Mantegna had seen in Padua, were taken up by the Bellini family workshop in Venice, in particular by his brother-in-law and friend Giovanni Bellini.

Neither artist stopped at mere emulation. In 1460, Mantegna moved to Mantua where he occupied the post of court painter to the ruling Gonzaga family until his death aged 75 in 1506. Bellini, who died 10 years later aged 86, spent his entire career in Republican Venice. Despite the distance between them, their work provides evidence of a continuing creative artistic exchange as both continued to develop new ideas well into old age. This lecture looks at how brothers-in-law can become brothers in art and explores the quietly revolutionary influence of a family of Venetian artists. 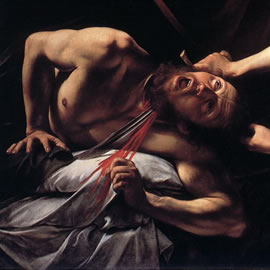 Caravaggio’s paintings inspired many artists during his lifetime and would go on to influence many more, from Orazio Gentileschi to Peter Paul Rubens, Gerard van Honthorst and Rembrandt. Each absorbed a different aspect of his work. His style spread across Europe and gave rise to the international movement known as ‘Caravaggism’. Yet for many, Michelangelo Merisi da Caravaggio is famed as much for his art as for his criminal record. Was it the violence of his times or his own violent spirit that inspired the dramatic lighting and intense naturalism of his work? This lecture follows the dramatic incidents of the artist’s life and looks at why and how his influence spread so far. 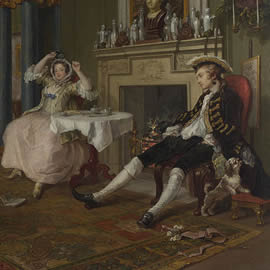 Sex and the City – Hogarth and 18th-century London

This lecture examines Hogarth’s ‘Marriage à la Mode’ other ‘modern moral subjects’. It looks at how the artist used his work to wage war against London’s sex trade and child poverty as part of his personal crusade to establish modern urban life as an appropriate subject for high art. Insights into the darker side of life in 18th century London are blended with the story of how Hogarth worked his way up from an apprenticed engraver to successful painter and philanthropist.

One reviewer wrote: “A very dark period of London history was illuminated by Julia – a hugely informative tour of Hogarth’s pictures and of London. She was able to bring out some unexpected humour in that savage world.” 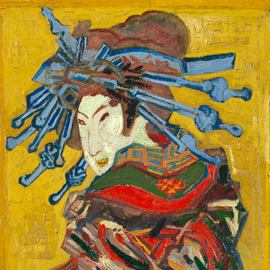 Vincent van Gogh’s life as an artist spanned an all-too-short ten years – the art that inspired him in London and Paris was not just that of his contemporaries but also Old Masters and the newly imported works by Japanese printmakers. An art world of galleries,  magazines, a network of friendships and even a shop are at the root of Vincent van Gogh’s ideas – but how did they come together in London and Paris? In this lecture I follow Vincent to London and then to Paris, looking at how the people he met and the art he saw, and collected, influenced his work.

Cézanne and Van Gogh: Death as a career move

Van Gogh and Cézanne made little impact on the public mind during their lifetimes – the British art world remained in thrall to the academic art of the nineteenth century and the French and British Impressionists. Both were rebels with art as their cause – Van Gogh painted quickly, exploiting the power of vibrant colour to express his emotions. Cézanne’s analytical approach led him to ponder each and every brushstroke. Neither sold much in their lifetime – only their artist friends appreciated the changes they brought into being. In this lecture I look at how the work of Van Gogh and Cézanne went from unsold to blockbuster in the early years of the 20th century because a few brave, but important art dealers and critics decided to sponsor them posthumously. 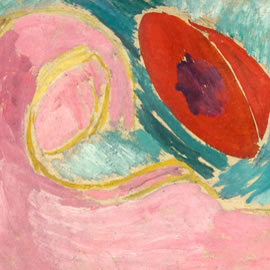 Avant-garde painter, designer, decorator, inspired colourist, mother and muse, Vanessa Bell was the warm heart of the Bloomsbury Group, a set who Dorothy Parker once described as “living in squares and loving in triangles”.
Navigating the tides of sexual and artistic revolution with tolerance, irreverence and wit she had a central role in the social and aesthetic life of Bloomsbury; alive to their love affairs, romances, passions and pleasures, and refreshingly uninterested in politics. She was the sister of the writer Virginia Woolf, wife of the critic Clive Bell, and counted the painter Roger Fry and the artist Duncan Grant among her lovers. Her Bloomsbury Group connections and their associated scandals have perhaps lessened the fame of her work – this lecture asks the question was Vanessa Bell the painter as radical as Virginia Woolf the writer? 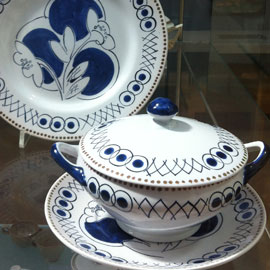 Britain vs the Bauhaus: modern design in the 1930s

Staatliches Bauhaus was an art school founded under Weimar Republic by the architect Walter Gropius. From 1919 to 1933 its tutors combined crafts and the fine arts in a radical new approach to design education. Less well known is the influence of the Bauhaus and other German design schools on design and art education in Britain in this period. As the impact of the economic ‘Slump’ of c.1929-34 hit British manufacturing sales, many in local and national government to the view that Britain’s struggling industrial base could be improved if moves were made to provide for better design education. This lecture looks at some the work of the key artists involved in improving British design in this period – including Paul Nash, Eric Ravilious, Vanessa Bell, Duncan Grant and Roger Fry; and at Unit One – formed by Paul Nash in 1933 to promote modern art, architecture and design. 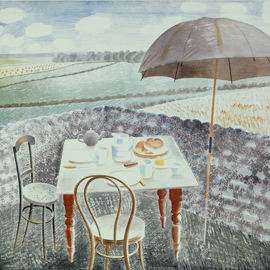 To many, Eric Ravilious (1903-42) is the master of precise cross-hatched water colour paintings of crystalline luminance: meditative images of a pastoral England which has perhaps never really existed and did not exist when he was painting them. Ravilious was serving as an official war artist with the RAF when he went missing, presumed killed, in September 1942. Despite his short career he is one of the best-known of Britain’s 20th-century artists – not just a painter but also a book illustrator, wood engraver and designer.
But where did he get his ideas from? His friendship with Edward Bawden began when both were studying at the Royal College of Art – both were inspired by the work of Paul Nash. Their friendship was the beginning of an artists’ colony at Great Bardfield in Essex. Bawden and his wife Charlotte moved to the village first and invited Ravilious and his wife Tirzah Garwood to join them. Could the art of Eric Ravilious have existed without the friendships and social networks which inspired and employed him?

Dalí : a renaissance artist in the 20th century

Like the Renaissance artists he admired, Salvador Dalí did not restrict his creative output to painting but was also a writer, poet, engraver, sculptor, architect, theatre designer,  and jewellery designer.  As well as designing the latter, Dalí selected the materials to be used, focusing not just on the colours or the value of the material, but also on their symbolic meanings. Jewels such as ‘El cor reial’ (1953, The Royal Heart) have become iconic works and are considered to be as exceptional as his paintings. He was an omnivorous reader who was as interested in science as he was in art and in this also his work reflects the Renaissance artist he admired. This lecture explores the work of Dalí the designer and science enthusiast – a Renaissance artist in the 20th century.